In those hazy days before either of our two boys were born, the name ‘Hilda’ was definitely on my shortlist of ‘girl names’.   I’m not sure that anyone I mentioned this to at the time thought it would be a good idea  But after spending a few days this week with Hild (in my imagination, at least) I’m still a fan.

We’ve been spending our days walking some of St Hilda’s Way (our route took us from Runswick Bay to Lealholm to Whitby and back again to Runswick Bay) and in the evenings I’ve been reading a historical novel about Hilda called ‘The Abbess of Whitby’ by Jill Dalladay.

Staying at the youth hostel in Whitby, amazingly close to the ruins of a more recent abbey and very near to where Hild herself once built a Christian community made it all come alive even more. Our final day walking from that site and up the coast was gloriously sunny and the sea was so blue that we kept talking about it’s blueness.

The previous two days, however, were either so freezingly windy or wet and muddy that our conversation was mainly about how cold or how miserable we were (apart from when we were singing ‘I Can’t Feel My Face When I’m With You’) or trying to find where we were on the map.

Despite how our bodies were feeling, I think there were still moments when we could enjoy where we were. There is something about walking that forces you to live in the present – whether watching an owl circling, looking for prey, appreciating the stones and roots in our path that made the mud less slippery, or feeling deep gratitude for a pub radiator or open fire.

Maybe it made it easier to imagine living in 7th Century Britain, too. Of course no one knows what Hild was really like, but she must have been wise and open-minded and and welcoming and brave, in days when humans were much less protected from mud and wind.

Our kids have never responded to the suggestion of an extended walk with unbridled enthusiasm. They think that it will be boring. They know that it will be hard. So do I, if I’m honest. However, I also know that doing challenging things together makes us more open, helps us know love in new ways and builds up our confidence for the journey ahead.

And, actually, no one said ‘bored’ until we got home. 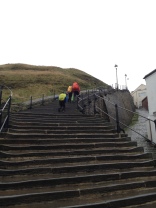 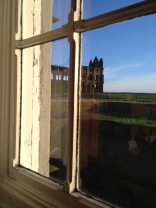 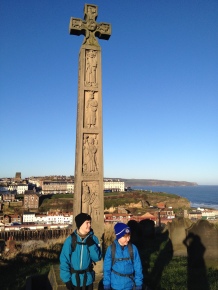 Most people can probably picture baby Moses in their minds, tucked in a basket floating in some reeds or elderly Moses, staff in hand, with the wind blowing his white scraggly hair.   Maybe it’s harder to picture young-man-Moses, just married, out in the wilderness, herding sheep, a long way from home.

He turns and sees a bush that appears to be on fire, but not burning up, and instead of running away, he goes closer.

I’ve been thinking this week about God appearing in a bush that was burning but not burning up. Is the detail of it not being consumed important, or is it just to point out that it wasn’t a normal fire? Normal fires consume things.

Then I remembered other stories in the Bible about things not being used up – bottomless jugs of wine at a wedding, jars of oil and flour for making bread that don’t go empty. Both of these ‘not consumed’ stories are about blessing and life and courageous faith.

In my life, what do I know that isn’t being used up? As a consumer, most of my things are being consumed, bit by bit. Which are the things that last?

Last week as I was starting to get ready for a weekend away with some young people, I wasn’t sure where the inspiration to make it happen was going to come from. But then, as I started to put things together, the spark and the joy seemed to bubble up inside. On the weekend itself, I had a sense of being completely contented to be with everyone in that place. I’d thought that I was empty, but discovered that I was full.

It reminded me that a lot of things about God never run out: grace, gifts, forgiveness, second chances. God’s fire isn’t just like a normal fire. Neither is God’s wine or God’s bread or God’s love.