We know very little French so going to France this summer was a bit of an ambitious holiday plan for us.  What motivated us was the thought that we might successfully put our 15 year old in the position of having to speak a bit of the language just to help us survive.

Never having driven in France before we were taking careful notice of road signs and this one soon became my favourite:  ‘CÉDEZ LE PASSAGE’.  Maybe I was a little bit in love with the country, but I thought that only the French would express this road instruction so elegantly.  In the UK our ‘GIVE WAY’ sounds much more direct, not to mention ‘YIELD’ in the US, which seems far more commanding.

As I thought about it, I wondered what life would be like if this was a mantra instead of just a road sign.  The boys and I had another week’s holiday back in the UK while Phil was at a conference and I decided to see what would happen if I took a more ‘cédez le passage’ approach to parenting for a few days.  Instead of insisting on what I wanted to do, or what I thought the boys would want to do, I tried to give way to their choices.  Let me tell you this was no small sacrifice.  We ended up playing Monopoly 8 times.   We spent a lot more time throwing Frisbees or kicking footballs than I found interesting and we watched ALL of the Ice Age films; but we had a great time together.

I’m not suggesting that this would be a good parenting style most of the time, especially when homework or jobs need to be done or timetables need to be kept, but it was a nice change for a few days.  Would it be sustainable as a way of life?

As the phrase continued to stay with me, I realised that the road sign only works if everyone follows it.  If a car stopped in order to yield to every car that was coming, there would be a lot of annoyed drivers in the queue behind.  It’s about mutual courtesy and cooperation and community.

So yes, maybe I am called to ‘cédez le passage’ but it is to both give way to love as well as allowing love to give way to me.   (But not necessarily to yield to playing more Monopoly. Please.) 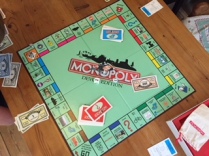 … the wisdom that is from above is first pure, then peaceable, gentle, willing to yield, full of mercy and good fruits, without partiality and without hypocrisy.