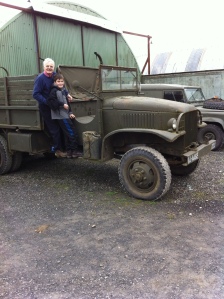 Rifling through a big bin of ‘lost property’ at my son’s school last week, looking unsuccessfully for some elusive tracksuit bottoms, I was struck by something: most of the stuff in there wasn’t lost. Not really. Nearly all of the things in the box were named. They just weren’t returned.

When we were in Devon recently, we were taken to the Cobbaton Combat Collection, mainly a dusty assortment of guns and tanks and things and not really of interest to me. What did catch my eye, however was a cabinet full of very ordinary things: army issue fly swatters, mess kits, boxes of bandages, unwritten letter forms, string vests and boot polish. It was almost like a lost property box of war.

Jesus described God as being like a searching woman. She turns on a light and sweeps the house inside out looking for a coin she’s lost.

What bits of us are lost or fragmented, broken or in need of healing? Will we let God shine a light and sweep them up, put then back together again, restore us to how we are meant to be?

It was said of St Cuthbert in the 7th century that ‘spirits that were chilled with sadness he could warm back to hope again’. May all our lostness be found and our chill be warmed by the God who searches and loves.