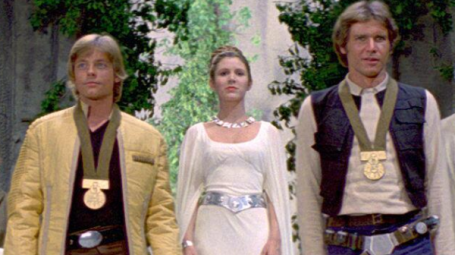 Don’t worry. I do realise that I look nothing like princess Leia in this photo. However, I was really pleased when, a little while ago, I noticed that my wedding dress looked eerily similar to the dress that princess Leia wore at the end of the first Star Wars film, when, as leader of the Rebel Alliance, she awarded medals of bravery to Luke Skywalker and Han Solo. Was that image of female dress elegance imprinted on my mind in 1977, only to subconsciously emerge in 1999 when I had reason to buy a white dress?

I like to think so. But it may be that I am seeing what I want to see.

Sometimes it would be nice to see what we want to see, instead of being dragged down by different emotions. At this time of year sometimes we want to feel more Christmassy, more generous, more gratitude than we actually feel. I know I do. When there is pressure to feel happy, it can sometimes be a bit self-defeating.

I really don’t know much about mindfulness but there is one easy exercise that I’ve had a go at a few times. The idea is to Notice Five Things. That’s it. It’s meant to help you connect with your environment and the present moment, rather than letting your thoughts whirl you away to fretting about the past or worrying about the future.

I may have got this wrong, but I think they can literally be any five things- whatever random things you notice.  I did this on a bus once, and believe me, there was nothing inspiring about my 5 things, but it helped me for a moment to stop worrying about whatever it was that had caught me up.

As a Christian, I think I’d like to take it a step further and add an element of thankfulness. Like Jesus’ words to his followers on the hillside: notice the birds and the wildflowers. Or, as in this paraphrase: ‘Give your entire attention to what God is doing right now, and don’t get worked up about what may or may not happen tomorrow. God will help you deal with whatever hard things come up when the time comes.’ (Matthew 6)

So here are 5 of my things from the last few days:

fitting in the final pieces of a jigsaw puzzle

the smell and satisfaction of sweeping up pine needles 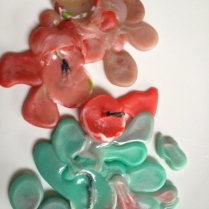